The following logs have been sitting for a short while – they are undated, and I haven’t been able to figure out their chronological order. Finally, I gave up and decided to just put everything up on here. 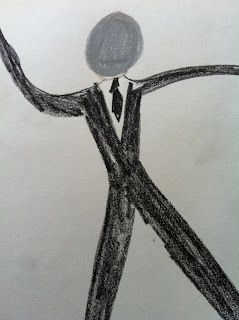 Jack drew me this when I was in the hospital and gave it to me.

We suspected a Camper, yesterday. Turned out to be a jogger. I felt a little bad for nearly killing the poor guy, but seriously, who goes on a full-scale jog downtown?!

I honestly don’t know why we stop in at any dining establishments, anymore. Nothing they serve sates my hunger, Jack only picks at things at most, and depending on what we ordered there are times that Razzie turns his nose up. When a dog doesn’t want your scraps, you know something has gone terribly, terribly wrong.
The only thing we really get out of it are the public settings. All of last night, Jack stayed awake just…screaming. I’m talking blood-curdling, piercing shrieks. He saw something out there. I wish I knew what the hell it was, so I could kill it.
I’ve got a sinking feeling about it. If it’s him, then I just flat-out don’t know what I’ll do.

THE UNNAMED CHILD BEDTIME STORY
Let me love and care for you
And hold you when you cry
Let me give you happiness
And all money can buy
Let me listen to you
Although you never speak
Let me give you all my strength
So you are never weak
Let me forfeit everything
I’ll even lose my name
I’ll look for you forever
Child, I am yours to claim
And if you ever tire of me
Please show me what to do
For I would gladly slit my throat
All for the love of you

He brought me the front page again, like he’s playing a one-sided game of fetch. It’s starting to annoy me. It’s always the same paper, always the same basic story – so-and-so found in alley, or dumpster, or in the trunk of someone’s car. I don’t know if he’s trying to pull some sort of Scooby Doo detective dog shit, but the way he looks at me when he drops newspapers in my lap is just getting to me. I want to say it’s human-like, but…in a Hannibal Lector kind of way.
So, not so much human.

Sometimes I wonder if it’s not natural. What use is a child to me? Unless he isn’t a child. Not really.

I found the perfect Scarlet-marked.
I waited for hours in the ER beside her – I know I was only making it worse, but I just couldn’t tear myself away. There was no much blood everywhere, like I’d slashed up her little body or cut an artery in her nose.
She had been panhandling on the street, convincingly passed off as a scrawny teenage boy. Dirty, boyish haircut, baggy jeans, glasses, but I bet she could be pretty if she cleaned herself up a bit. She had on a college sweater for [REDACTED], probably scraping by on whatever she made on the streets. Living alone. Maybe taking home a girl once every few weeks. Notably, she had on a red scarf – it didn’t fit with her outfit, and it was a mild day. It was overt, marking herself with red. When she’d started gushing blood, it was like…this out-of-body experience, where I could see snippets of her life. I’d never felt so connected to one of them before. I’m still not sure what it means.
I decided, though. I approached her, and when I did, the blood started pouring faster. It was broad daylight, and Jack was getting edgy. All I could do was pretend to be normal, even though we both knew otherwise. She couldn’t speak without the blood spilling down her face and into her mouth, choking on it as it slid down the back of her throat, too. She was coughing, spitting blood out all over the street – I yelled for someone to call an ambulance, took her hand and waited with her until it arrived, then trailed behind in the car.
We were stuck waiting in the hospital waiting room for god-knows-how-long – time dragged, and we were nearly kicked out twice by nurses who clearly haven’t been getting laid. Finally they at least got Jack some paper and pencil crayons to amuse himself with.
Once they let me in, her nose started bleeding again. Just a trickle, this time, and she was hooked up to an IV. They’d cauterised the inside of her nose, but I guess even the best ENT specialist can’t stand up against a bond that deep.
I gave her all the logs I’d written for the past while – bits on napkins, papers torn out of the notebook, everything. She told me where she lives, and I told her that she could be my First.
Always nice to have a link to the online world and a back-up.
Posted by The Queer in Question at 00:00